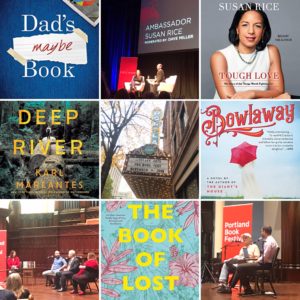 In 2002, when my family moved from Santa Cruz to Portland, one of my very first acts as a citizen was to buy a subscription to Portland Arts and Lectures—world class authors speaking to capacity audiences in a beautiful concert hall? I’m in! Arriving downtown for the first lecture, my husband and I were pleased and shocked by the hullaballoo. There were people with lighted wands directing cars to parking garages. This traffic situation was not for the Rolling Stones, but for a writer. Man. My heart warmed. I knew this city and I were a good fit.

Last Saturday I spent the day at the Portland Book Festival in which the Schnitzer concert hall and nine additional stages, plus the Portland Art Museum were filled with 100+ amazing writers, booksellers, and readers for an entire day. Thousands of attendees buy books, become inspired, support writers and join in the city’s thriving literary community. It’s an embarrassment of riches.

Here are the events I attended:

In her conversation with Dave Miller, she talked about her parent’s contentious marriage, her father’s strengths and philosophy. He told her, “Bigotry is a function of someone else’s insanity.” And he pushed her to never ask for permission or affirmation. Believe in herself, she was taught.

Speaking about today’s political climate, no surprise that Ambassador Rice views climate change as the top national security threat. She spoke confidently that if the current administration prevails in the next election, damage wrought by them, on the climate, on the middle class and poor, on immigrants and health care, may not be able to be turned around. But if democrats win the election we can undo some of the damage starting by rejoining the Paris Agreement.

Tim O’Brien was next up on my dance ticket. He spoke about his new book, DAD’S MAYBE BOOK. O’Brien came to fatherhood late, having his first son at 56, and he spoke about the particular vulnerability of being an older father. He spoke of his sons as being “pains in the ass, and needles in the heart.” His sons brought “joy to a man who felt he had no joy left,” a man who self-identifies as having the heart of a crocodile. That was a heartbreaking thing to hear, especially knowing that the particular sweet joy of children in the house flows and ebbs.

O’Brien was incredibly candid and tender, tearing up a few times, as was I. He spoke about his wife, giving him a “kid ultimatum.” He tried cornering her, asking her if she loved what didn’t exist, the possibility of a child, more than she loved him. And she said, yes, absolutely. It was so curious. Don’t we all love what doesn’t exist? Isn’t that the very definition of yearning?

Finally he spent time talking about the concept of MAYBE. Since serving in the Viet Nam war, life has forever been a maybe. Maybe I will step on a landmine today. Maybe my best friend will take the hit. We’re all living maybe lives. Maybe, according to O’Brien, is not evil, it is not immoral. “Maybe.” “I think.” “Possibly.” They’re all excellent words. Not being certain is a gift, because uncertainty keeps us open to the possibility that we may be wrong, we may have something to learn. The current administration, said O’Brien, suffers from a dearth of maybe.

The last event of my day, a panel on family and history and trauma and breaking free, Ties that Bind. Damn! Isn’t that relevant to…ummm….everyone? Inherited trauma leaves little and large road blocks in all our DNA.  The panelists were the funny and wonderful Elizabeth McCracken, the exuberant Daniel Jose Older, and Karl Marlantes.

The thing that interested me most was when the discussion veered toward ghosts. Particularly how different cultures treat their ghosts. Older spoke of the disrespect and eradication of ghosts in the US, while in other cultures, namely his Cuban heritage, ghosts are leaned upon. ” Put out some food and ask for help,” he suggested. McCracken took up the conversation, noting that our ghosts are often disenfranchised from self and story. For example a ghost is simply “the ghost of a little girl,” not a particular little girl. It got me thinking about ancestors and dreams and how we might find guidance in this rough and tumble world. I know I could use some. I’d love to go through life feeling my grandmother, who died 27 years ago, has my back. And, what of the long line of ancestors about whom I know nothing? Maybe they have my back too. Maybe.

I always tell my writing students the quirks and idiosyncratic behaviors are the juice, the jam, of our characters. Those details make our people real. McCracken (whose work and humor I LOVE) says that quirks are the manifestations of trauma. Imagine, so many of us hang the hat of our personality upon inherited trauma, what a rich vein to burden our characters with quirks and oddball habits directly related to the lives of our ancestors!

All in all, the festival was a thrill.  I missed so many panels and readings, but you know what? That’s okay. It’s nice to know that Literary Arts lays out such a feast. And, we can hear what we missed in their Archive project.

Do you want effective leadership in our country to

It takes some serious cognitive dissonance to hold